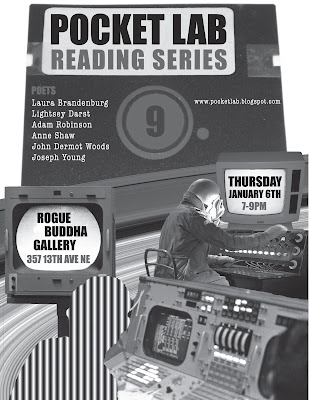 Laura Brandenburg is a former free-lance music writer from Minneapolis. She currently co-hosts The Riot Act Reading Series and is working on a MFA in Creative Writing from Hamline University. Read a poem by Laura here, and watch her read some of her poems here.

Originally from Tallahassee, Lightsey Darst writes, dances, writes about dance, and teaches in Minneapolis. Her book Find the Girl was published by Coffee House Press in April 2010, and her awards include fellowships from the National Endowment for the Arts and the Minnesota State Arts Board. She also hosts the writing salon “The Works”. Read her poems here and here.

Adam Robinson lives in Baltimore, MD where he runs Publishing Genius, a small press. He has published two books, including Adam Robison and Other Poems, which has been nominated for the 2010 Goodreads Poetry Award. He contributes to the lit blog HTMLGiant, and plays music in Sweatpants, a rock band. Read some of his poems here and here.

Anne Shaw is the author of Undertow (Persea Books, 2007), winner of the Lexi Rudnitsky Poetry Prize. Her work has appeared in numerous journals, including New American Writing, Black Warrior Review, Green Mountains Review, and Verse. Her website is www.anneshaw.org. Read her poems here and here.

John Dermot Woods is the author of The Complete Collection of people, places & things. He has a collection of comics, and collaborative novel, and a comic chapbook (from Double Cross Press) forthcoming in 2011. He edits the arts quarterly Action,Yes, organizes the online reading series Apostrophe Cast, and co-hosts the Soda Series in Brooklyn. He is a professor of English at SUNY Nassau Community College. Read one of his stories here and one of his comics here.

Joseph Young lives and writes in Baltimore, MD. His first book, Easter Rabbit, is out on Publishing Genius. He has written on art for a variety of magazines and newspapers, and some of this writing can be found on Baltimore Interview. He is fond of collaboration and has created art exhibitions in concert with visual artists such as Christine Sajecki and Magnolia Laurie. Visit his microfiction blog and his website.
Posted by mc at 8:41 PM