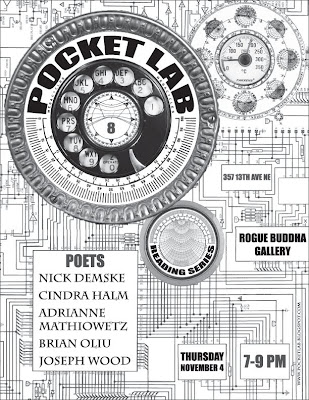 BACK AT THE BUDDHA!
7PM!
The scientists loooove you!

Nick Demske lives in Racine, Wisconsin, and works there at the Racine Public Library. He was awarded the 2010 Fence Modern Poets Series prize for a self-titled manuscript that will be published in November of 2010. He's a curator of the BONK! Performance series, a founder of the Racquetball Chapbook Tournament & Press and is also an editor of the online venue boo: a journal of terrific things. Visit him sometime at nickipoo.wordpress.com

Cindra Halm likes to write, read, dance, play with her niece and nephew, and hang out at Lake Superior. Her poetry chapbook, Inflectional Weather is published by Press of the Taverner, and she has published poems, stories, essays, articles, and reviews. She writes often for Rain Taxi Review of Books, and has taught at The Loft Literary Center for years. Her love affair with language continues to make many shapes and she often describes her poems as delving into physics and metaphysics.

Adrianne Mathiowetz is a Minneapolis-based freelance writer, site editor and photographer, whose stories have appeared on the Chicago Public Radio podcast Love and Radio. She blogs at openopenclose, and her self-published book of poems, These Quiet Repairs, can be found on Lulu.

Joseph P. Wood is the author of two books--I & We (CW Books) and the forthcoming Fold of the Map (Salmon Poetry)--and five chapbooks. He is director of the Slash Pine Poetry Festival and the Slash Pine Writer Hikes and whatever harebrained event he can think of. He lives in Tuscaloosa with his wife, Amy, and daughter, Daisy. Read some of his poems here and here.
Posted by mc at 11:25 PM