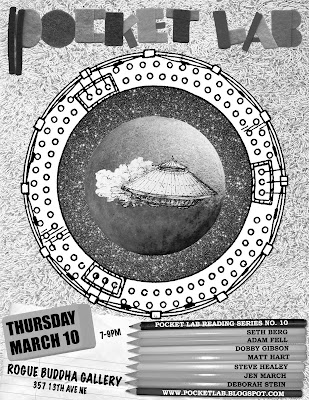 At the fabulous Rogue Buddha Gallery (357 13th Ave. NE), it's INVASION OF THE TALL POETS (and big-hearted writers):

Seth Michael Berg earned his MFA in poetry from Bowling Green State University in 2003 and since has been bouncing around the country teaching, tending bar, sculpting, writing, and occasionally snowshoeing. His first book, Muted Lines From Someone Else's Memory is the winner of Dark Sky Books 2009 book contest. Other poems and fiction can be found in Connecticut Review, Lake Effect, Word Riot, JMWW, 13th Warrior Review, Chiron Review, BlazeVOX, Pike Magazine, Disappearing City Literary Review, and Dark Sky Magazine, among others. Berg lives in Chaska with his photographer wife, Ashley, their supernatural son, Oak, and their Saint Bernard, Icarus. When not writing, Berg can most likely be found indulging his addiction to hot sauce or slowing down somewhere in a forest. Read some of his poems here.

Adam Fell’s first book of poems I AM NOT A PIONEER will be published in late March 2011 by H_NGM_N Books. He is the author of the chapbook Ten Keys to Being a Champion On and Off the Field (H_NGM_N 2010) and his poems have appeared in Tin House; Forklift, Ohio; Diagram; Crazyhorse; notnostrums; Sixth Finch; & Fou, among others. He teaches and lives in Madison, WI.

Dobby Gibson is the author of Polar (Alice James Books, 2005), which won the Beatrice Hawley Award; and Skirmish (Graywolf Press, 2009). He lives in Minneapolis. Read some of his poems here and here.
Matt Hart is the author of the poetry collections Who's Who Vivid (Slope Editions, 2006) and Wolf Face (H_NGM_N BKS 2010). A third full length collection, Light-Headed, will be published by BlazeVOX in the spring of 2011, and a fourth collection Sermons and Lectures Both Blank and Relentless will be published by Typecast in 2012. A co-founder and the editor-in-chief of Forklift, Ohio: A Journal of Poetry, Cooking & Light Industrial Safety, he lives in Cincinnati where he teaches at the Art Academy of Cincinnati. Read some of his poems here.

Steve Healey is the author of two books of poetry–10 Mississippi and Earthling–both on Coffee House Press. He has published poems in numerous magazines, including American Poetry Review, Boston Review, Fence, and Jubilat, and in anthologies, including Legitimate Dangers: American Poets of the New Century. He lives in Minneapolis, and has recently taught at Michigan State University, Macalester College, and the University of Minnesota.
Jen March is the creator of Co-Kisser productions, a new way to think about publishing poetry. Co-Kisser will be hosting a poetry-film festival in Minneapolis in October 2011. Please visit www.co-kisser.com for more information. Read some of her poems here and here.

Deborah Stein is a playwright based in Minneapolis and New York. Her plays have been produced and developed nationally at Actors’ Theatre of Louisville, the Theatre @ Boston Court, the Guthrie, Seattle Rep, Stages Rep, the Women’s Project, the Wilma Theatre, Live Girls!, Bay Area Playwrights’ Festival, and Theatre Artaud; in New York at the Public Theatre, Dance Theatre Workshop, and Ars Nova; and internationally in Poland, Ireland, Edinburgh (the Traverse) and Prague. Her writing is published in Theatre Forum, Play: A Journal of Plays, and The Best American Poetry of 1996. She has taught writing at Yale University, NYU, Parsons School of Design, and Brown University, where she received her MFA. She is the recipient of the 2010-2011 McKnight Advancement Grant at the Playwrights’ Center in Minneapolis, where she was also a two-time Jerome Fellow. Currently, she is a resident artist at HERE, a 2009-2011 Bush Artist Fellow, and a member of New Dramatists. Read about her most recent play here.
Posted by mc at 8:06 AM