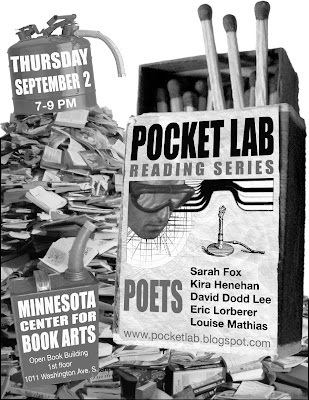 Sarah Fox is a doula and an instructor of Creative Writing at the University of Minnesota, where she's currently pursuing an MFA in Poetry. Her book Because Why was published by Coffee House Press, and recent work has appeared or is forthcoming in Conduit, ElevenEleven, Action Yes, Spout, Rain Taxi, and Tammy. She also writes for the blog Montevidayo (montevidayo.com). She and her partner John Colburn live in Northeast Minneapolis where they grow entheogenic plants and co-imagine a future Center for Visionary Poetics.

Kira Henehan was born in New York and grew up in various locales around the U.S., Canada, and the Caribbean. Her work has been published in Fence, jubilat, Chelsea, Conjunctions, and Denver Quarterly, among others. She has also received a Pushcart Prize and been included in A Best of Fence: The First Nine Years anthology. Henehan attended San Francisco State University and Columbia University, and now lives in New York City. Her first novel, Orion You Came And You Took All My Marbles, was recently published by Milkweed Editions.

David Dodd Lee is the author of seven books of poems, most recently The Nervous Filaments (Four Way Books 2010), Sky Booths in the Breath Somewhere: The Ashbery Erasure Poems (BlazeVox 2010) and Orphan, Indiana (University of Akron Press, forthcoming Fall 2010). He teaches at Indiana University South Bend, where he is also editor in chief of 42 Miles Press.

Eric Lorberer has published poems in dozens of literary magazines, from American Poetry Review to VOLT, and won a SASE/Jerome Fellowship for his poetry. His essay "The Ashbery Bridge: Poetry and Public Space" was named a Notable Essay in The Best American Essays 2008. He edits Rain Taxi Review of Books and runs the Rain Taxi Reading Series and the Twin Cities Book Festival.

Louise Mathias is the author of Lark Apprentice, which won the New Issues Poetry Prize and was published by New Issues Press in 2004, as well as the chapbook Above All Else, the Trembling Resembles a Forest, which Martha Ronk chose for the Burnside Review Chapbook Prize (2010). She splits her time between Joshua Tree, California, and rural Indiana. Read three of her poems here.