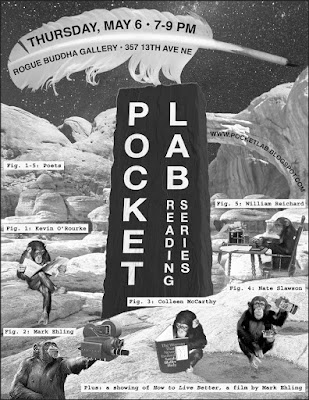 Mark Ehling is a writer living in Minneapolis. His short fiction has appeared nationally--in magazines such as Utne Reader, Denver Quarterly and The New Orleans Review--and his short film, "How to Live Better," is currently screening at local festivals and at the Walker Art Center's Film + Video bay. Visit his blog here.

colleen mccarthy writes poems that conceive of women's power as a renewable resource, welling up in the shadow of the nuclear reactor, and fueled by the subversion of names like hysteric or sorceress. she's developing a course that integrates yoga and poetry writing to empower students towards inner change and community activism, and has been invited to pilot her program this summer at the San Francisco chapter of 826 Valencia, a popular free writing workshop for youth. colleen will earn her certification as a yoga instructor this july, and her mfa from the university of minnesota next may. her poems have appeared in dear camera.

Kevin O’Rourke is an MFA candidate at the University of Minnesota, where he served as the poetry editor of Dislocate 5. New work can be found in Tammy, 580 Split, and at 300 Reviews.com.

William Reichard is a writer, editor, and educator. His fourth collection of poems, Sin Eater, will be published by Mid-List Press in April 2010. His previous collections include This Brightness (2007) and How To (2004) both from Mid-List Press, and An Alchemy in the Bones (1999) from New Rivers Press. Reichard has published a chapbook, To Be Quietly Spoken, with Frith Press, and he revised and edited the award-winning memoir, The Evening Crowd at Kirmser's: A Gay Life in the 1940's, by the late Ricardo Brown, published my the University of Minnesota Press.

Nate Slawson edits the online magazine dear camera and designs books for Cinematheque Press. He is the author of the chapbooks a mixtape called Zooey Deschanel (Line4, 2009) and The Tiny Jukebox (H_NGM_N Books, 2009). Recent work has appeared or is forthcoming in diode, H_NGM_N, Typo, Forklift Ohio, Cannibal, DIAGRAM, and other places.
Posted by mc at 8:47 AM