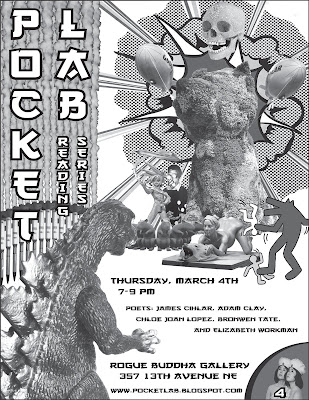 Adam Clay is the author of The Wash. His second book, A Hotel Lobby at the Edge of the World, is forthcoming from Milkweed Editions. He co-edits Typo Magazine, curates the Poets in Print Reading Series at the Kalamazoo Book Arts Center, and teaches at Western Michigan University.

Originally from New Mexico, Chloe Joan Lopez holds an A.B. in physics from Harvard University and an M.A. from the Writing Seminars at The Johns Hopkins University. She was the winner of the 2009 Red Hen Press Ruskin Art Club Poetry Award, a finalist for the 2006-2007 Writing Fellowship from the Fine Arts Work Center in Provincetown and the 2008 Andres Montoya First Book Prize, and was recognized in 2006 by the Artist's Grant program of the Massachusetts Cultural Council. Her work has appeared in Los Angeles Review, can we have our ball back?, Spoon River Poetry Review, Mississippi Review, and other journals, and a chapbook, Quodlibet, is now available from New Michigan Press. She lives in Somerville, Massachusetts.

Bronwen Tate is the author of the chapbooks Souvenirs (Dusie 2007), Like the Native Tongue the Vanquished (Cannibal Books 2008) and Scaffolding (Dusie 2009). She is a PhD candidate in Comparative Literature at Stanford University, where she edits Mantis: A Journal of Poetry, Criticism and Translation. She blogs about cooking and knitting at Bread and Jam for Frances.

Through the Pennsylvania Council on the Arts, Elisabeth Workman has served as a poet-in-residence, conducting workshops in schools throughout rural Pennsylvania. More recently, she taught writing and rhetoric to international students in the Middle East. Her work has appeared in fourW, Absent, Abraham Lincoln, diode, GlitterPony, and West Wind Review, among others. Her chapbooks include a city_a cloud, Opolis, and the forthcoming Maybe Malibu, Maybe Beowulf. She's the recipient of a 2009 Jerome Emerging Writer Award, and a 2010 MSAB Artist Initiative Grant.
Posted by mc at 9:05 PM