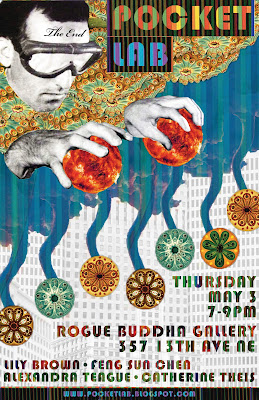 Lily Brown is the author of Rust or Go Missing, published by Cleveland State University Poetry Center in 2011. Recent poems are out or forthcoming in Gulf Coast, Epiphany, Catch Up, and The Offending Adam.

Feng Sun Chen's first book is Butcher's Tree from Black Ocean. She is also the author of chapbooks Ugly Fish from Radioactive Moat, Arcane Carnal Knowledge from Pangur Ban Party (and Night Vegetable Press), and blud from Spork Press. Recent poems appear on her blog, in Conduit, Kill Author, Claudius App and other places. She is currently a graduate assistant and MFA student at the University of Minnesota, and sometimes blogs for Montevidayo.com.

Alexandra Teague is the author of Mortal Geography (Persea 2010), winner of the 2009 Lexi Rudnitsky Prize and the 2010 California Book Award. Her poetry has appeared in Best American Poetry 2009, Best New Poets 2008, and many journals. She is currently Assistant Professor of Poetry at The University of Idaho.

Catherine Theis is a poet and playwright living in Chicago. Recent poems and plays have appeared inAnother Chicago Magazine, Barrelhouse, CutBank, and 1913 a journal of forms. Her first book is called The Fraud of Good Sleep.
Posted by mc at 10:13 AM