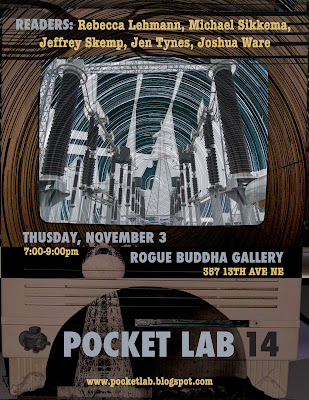 
Rebecca Lehmann is the author of Between the Crackups, forthcoming from Salt Publications. Her poems have been published in Tin House, The Iowa Review, The Gettysburg Review and other journals. She lives in La Crosse, Wisconsin.


Mike Sikkema is the author of the chapbooks Code Over Code (Lame House Press), Saying Things as an Engine Would (HNG MN), I Could Jump Through the Keyhole in Your Door (Horse Less Press), Autogeography, which is a collaboration with Jen Tynes (Black Warrior Review), and Wander Rooms and Outside Noise (forthcoming from Grey Book Press). He is also the author of the book Futuring (Blazevox).


Jeffrey Skemp is a poet, performer and photographer living in Minneapolis. His debut poetry + music CD SPENT was released earlier this year. He is also member of Bosso Poetry Co.


Jen Tynes is the founding editor of Horse Less Press. She is most recently the author of Heron/Girlfriend (Coconut Books) and the co-author, with Michael Sikkema, of Autogeography (Black Warrior Review). She has chapbooks forthcoming from DoubleCross Press and Dancing Girl Press, and she lives and teaches in Grand Rapids, Michigan.


Joshua Ware lives in Lincoln, Nebraska where he is finishing his doctorate in poetry at the University of Nebraska-Lincoln. He is the author of Homage to Homage to Homage to Creeley (Furniture Press), the chapbooks Excavations (Further Adventures Press) and A Series of Ad Hoc Permutations (Scantily Clad Press), as well as the co-author of I, NE: Iterations of the Junco (Small Fires Press). His writing and collages have appeared in many journals, such as American Letters & Commentary, Colorado Review, New American Writing, New Orleans Review, and Quarterly West.
Posted by mc at 11:58 PM