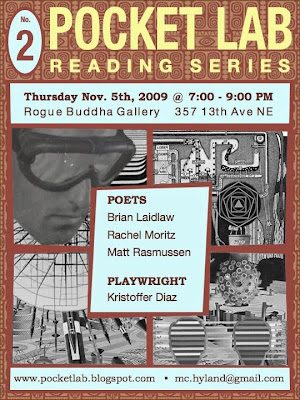 Kristoffer Diaz is a 2009-2010 Jerome Playwriting Fellow. His play The Elaborate Entrance of Chad Deity had its world premiere at Chicago’s Victory Gardens Theater in September, and will be produced here in Minneapolis by Mixed Blood in April.

Brian Laidlaw is a poet and songwriter from San Francisco.  After several years of touring and rambling, he is currently working toward an M.F.A. in poetry at the University of Minnesota.

Rachel Moritz is the author of two poetry chapbooks, Night-Sea (2008) and The Winchester Monologues (2005), both from New Michigan Press. Her poems have been published in American Letters and Commentary, Colorado Review, Denver Quarterly, HOW2, Indiana Review, 26, typo, and Verse Daily. Among her awards are a 2008 SASE/Jerome grant, and a 2005 fellowship from the Minnesota State Arts Board. She edits poetry for Konundrum Literary Engine Review and publishes WinteRed Press, a Minneapolis-based micropress of innovative poetry.

Matt Rasmussen’s poetry has been published or is forthcoming in Gulf Coast, Cimarron Review, Mid American Review, MARGIE, New York Quarterly, Natural Bridge, Dislocate, and Water~Stone Review. He is currently a Bush Artist Fellow and has received grants and residencies from the Jerome Foundation, SASE, The Corporation of Yaddo, and The Anderson Center in Red Wing, MN. His chapbook, Fingergun, was published in 2006 by Kitchen Press.
Posted by mc at 9:46 PM