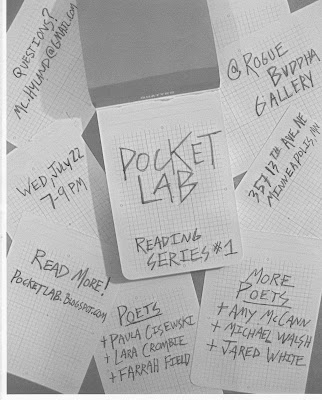 Paula Cisewski's collection of poems, Ghost Fargo, was selected by Franz Wright for the 2008 Nightboat Poetry Prize and will be released in spring 2010. She is also the author of the collection Upon Arrival, and of three chapbooks: Two Museums (MaCaHu Press, 2009), Or Else What Asked the Flame (w/Mathias Svalina, Scantily Clad Press, 2008), and How Birds Work (Fuori Editions, 2002). Thanks to the assistance of a 2009 SASE/Jerome grant, she is currently at work on a hybrid text memoir titled Novelty Seekers Anonymous.

Farrah Field's first book of poems, Rising, won Four Way Books' 2007 Levis Prize. Her poems have appeared in many publications including the Mississippi Review, Typo, Harp & Altar, Fulcrum, La Petite Zine, and are forthcoming in Ekleksographia and effing magazine. She lives in Brooklyn and blogs at adultish.blogspot.com.

Amy McCann has an MFA in poetry from Eastern Washington University and teaches writing at Northwestern College in Saint Paul. Her work has appeared in Third Coast, Hotel Amerika, Puerto del Sol, and other journals, as well as on mnartists.org.

Michael Walsh's first full-length book "The Dirt Riddles" won the Miller Williams Prize in Poetry from the University of Arkansas Press and will be published in Spring 2010. Red Dragonfly Press published his chapbook "Adam Walking the Garden" and will publish another, "Sleepwalks." His poems have appeared in Alaska Quarterly Review, Chattahoochee Review, DIAGRAM, Meridian, and other journals.

Jared White received an MFA in poetry from Columbia University, and plays a fair amount of music, mostly on the piano. His poems have appeared in Another Chicago Magazine, Barrow Street, Cannibal, Fulcrum, Coconut, Horse Less Review, Word For / Word, and Verse. He also published essays on poetry and music, most recently in Harp & Altar, Open Letters, and Poets Off Poetry. He was awarded a University Writing Prize from the Academy of American Poets. A chapbook of poems, entitled Yellowcake, was in Cannibal Books' Narwhal compendium. His very occasional blog, No No Yes No Yes, can be found at jaredswhite.blogspot.com.
Posted by mc at 10:23 PM